Greed 'til You Bleed 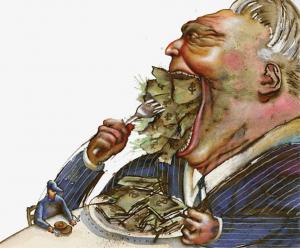 Greed and utter disregard for human capital has created a global economy of uncertainty, underemployment, unemployment and poverty.

This Greed was the foundation for COVID and whatever future crisis-du-jour the ghouls are dreaming up while they sip expensive champagne at the World Economic Forum.

The creative elements of society have been relegated to driving tow trucks, part time food service jobs and mailing out resume after resume while trying to survive.

While it may be argued that capitalism is at fault, I maintain that it is outright economic tyranny that has allowed corporations in collusion with the government to:

The news media keeps the populace in the dark as to what is really happening. Online media has become a worthless second rate source of non-stop tabloid drivel that serves only to keep us distracted with "bread and circuses" entertainment.

Those who feel the pain of poverty licking at their heels will agree with me that the underemployment/unemployment/poverty rate is probably above 50%. If the news media actually reported news, rather than serving as a corporate/government propaganda engine, people would storm their state capitols and then march on Congress.

I caution second and third world economies that our greed engine has also taken advantage of them in its quest for profits. There will always be a new market where the labor is cheaper, enabling a less technical workforce to fill in the gaps by sheer force of numbers.

What is happening to us will happen to them; entire economic sectors that depended on outsourcing will disappear almost overnight and leave the legions of technical workers underemployed/unemployed/in poverty now that they are no longer needed.

The heads of those companies and their upper management will do nicely, but the workers that have been working in those jobs are doomed. Those governments, like ours, responded only to greed and power, and neglected to plan ahead. The outsourcing jobs should have been jobs that were needed in local, regional and the national economy of that nation.

If this pattern is allowed to continue, there will be a domino effect as one economy after another turns to dust. Billions of people will be out of work, with no hope for their lives, their children's lives or any kind of future. Inflation will render most of the world's currency worthless.

A massive economic collapse of this magnitude is the perfect breeding ground for fascist regimes to spring up and start World War III. Sounds crazy, doesn't it? One of the best indicators of societal instability and collapse is massive economic disparity. We are in the beginning stages. Can it be stopped?

Yes, it can be stopped, and it can be stopped quite easily. Not a lot of people are needed to stop it. Just enough to come together and bring about ten percent of the chronically un/under employed back away from survival mode. Why so few? And how is this possible?

The creative elements of the workforce actually possess the technical and business know-how to run the economy. My call to this workforce is to form a "creative guild".

In the old days, guilds were an important and effective way of designating groups of workers who had the requisite skills to actually perform their jobs. I think it is time to bring the guilds back, and they must make a business case that is very compelling to the companies who shipped their jobs overseas in the first place.

And, these guilds themselves can create some viable competition for the big firms that dominate our lives now. For the information technology sector, open source software will play a big role in how the guilds will fulfill their mission and bring creative talent from where it is to where it's needed.

So what about the other countries where our jobs got outsourced to? They can follow our lead and form their own guilds, and save their own nations before their societies burn like matchsticks.

Another necessary outcome is that the current corporate structure and its ability to control government at all levels must be constructively dismantled. What is constructive dismantlement? It is the process by which the guild system becomes the dominant form of business exchange.

Capital markets that depend on ever increasing debt service to function cannot continue indefinitely. I am proposing a whole new capitalization system that makes it easier for businesses to start, build a good workforce and continue operating. The old metrics that implored companies to structure themselves for unbridled growth must be retired and forgotten.

Massive growth rates are impossible to maintain, and in order to maintain them these companies have to make it up somewhere, and they start with your job. The old style corporate model maintains no social contract with anyone. They are answerable only to the investors and creditors. No nation can survive a worldwide system built on such an abusive, inhuman business model.

What about history? The Roman Empire ground to a halt because they were bound to run out of resources to pillage from their neighbors, although they had a good run at it. And Rome was a prime example of  massive economic disparity between the haves and have-nots. The slaves actually had it better than we do, since a slave had to be fed and housed by its owners, whereas our owners are content to let us be taken out with the trash and left for dead.

What about writing to our congressmen?

Do you really believe that your one little letter has more effect than a lobbyist paid $500,000 a year to sway decision makers?

Get real. 99% of all politicians have been bought and paid for even before you see them on the ballot. We are in the time of "Atlas Shrugged", and Ayn Rand's dire predictions are coming true.

But it's not too late. We can take back control.

In that world, you can have the breathing room you always wanted to pursue happiness the way the founders intended.

It's time to get started on our new lives.